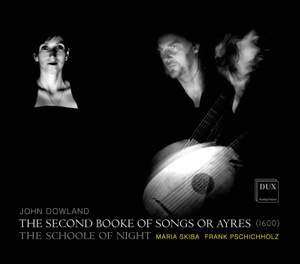 Dowland: The Second Booke of Songs or Ayres

The Schoole of Night

Dowland: Book of Songs, Book 2: Die not before thy day

Part II: Then sit thee down, and say thy Nunc dimittis

Dowland: Book of Songs, Book 2: If floods of tears could cleanse my follies past

Dowland: Book of Songs, Book 2: White as lilies was her face

Dowland: A Shepherd in a Shade

Dowland: Book of Songs, Book 2: Faction, that ever dwells in court

Dowland: Shall I sue?

Dowland: Book of Songs, Book 2: Toss not my soul

John Dowland, of English or possibly Irish origin, was born in 1563, probably in London. He was a lutenist of distinction but failed, allegedly because he was a Catholic, to win a position in the royal service, and therefore sought his fortune abroad at Kassel and later, in 1598, at the court of Christian IV of Denmark. He was forced by debt to return to England in 1606 and eventually won appointment as one of the King’s Lutes in 1612. He performed during the funeral ceremonies of King James I and ironically dying the following year. Dowland was the composer, in particular, of one of the best-known songs of the period, Flow, my teares, music much imitated and epitomising the fashionable humour of the day - melancholy.