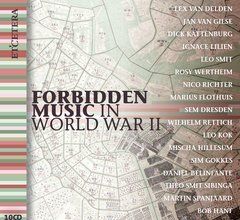 Throughout, the set testifies to the courage of those for whom music became an existential assertion of identity in the face of atrocity...The sincerity of Pameijer’s playing impresses and moves... — Gramophone Magazine, Awards Issue 2015 More…

Bosmans: Poème for piano and orchestra

Bosmans: Concertino for piano and orchestra

Kattenburg: Piece for flute and piano

Smit: Concertino for cello and orchestra

Smit: Concerto for viola and strings

Smit: Sonate for flute and piano

Wertheim: Sonatine for cello and piano

This CD box set, released seventy years after World War II ended, contains music composed by those who were persecuted during that same war; any performance of these works was strictly forbidden at the time. Nineteen Dutch composers were deported to concentration camps of which only six survived the atrocities. Others went into hiding or they survived using fake identities. Almost all saw their musical career end inopportunely.

The untimely loss of these composers dealt a severe blow to Dutch music history and as a result the musical landscape was completely altered. A new generation of musicians was eager to fill the void and during these years of reconstruction a new type of music evolved rapidly moving towards what was later called modernism. The new aesthetics pushed composers away from writing a charming melody, using harmonious chords, or pleasing and moving the audience. Pre-war music was considered corny, dilettantish, conservative and hopelessly outdated. Instead, atonality, extremism and a conceptual outlook dominated the scene. Therefore, this box set is designed to revalidate the generation of composers that was lost in the war. Over the past twenty years, The Leo Smit Foundation has done research on these maltreated, forgotten composers and their works. Artistic manager Eleonore Pameijer assisted Etcetera in assembling the set from a collection of previously released recordings on a range of other labels. CD no. 10 however, contains a number of surprises and premières on CD.

Throughout, the set testifies to the courage of those for whom music became an existential assertion of identity in the face of atrocity...The sincerity of Pameijer’s playing impresses and moves throughout... this is a major issue...It breaks your heart, and opens minds and ears to much we haven’t encountered before. Outstanding.