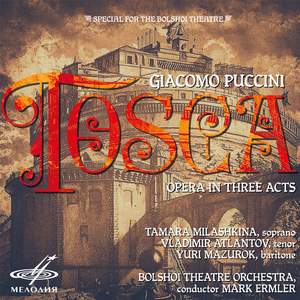 Milashkina's Slavic vowels won't suit everyone, but she and Atlantov make an ardent pair, with Mazurok a snarling Scarpia in this characterful production. — BBC Music Magazine, January 2016, 4 out of 5 stars

One of the most popular operas of the world repertoire, Tosca was finished in the last year of the 19th century. It was based on the French playwright Victorien Sardou’s drama written for Sarah Bernhardt. The premiere of the opera that took place in 1900 in Rome was not accepted with much enthusiasm, and only the performance at La Scala under Arturo Toscanini became a true triumph.

The story of singer Floria Tosca and her beloved painter Mario Cavaradossi, who fell victim to bloody despot Baron Scarpia on the background of the revolutionary events in Italy of the early 19th century, is still able to move to the innermost of one’s heart as the heat of dramatic fervour is masterfully captured in the music.

Numerous audio and video recordings of the opera featuring the world’s best singers and conductors were made in the previous century.

This recording was realized by the USSR Bolshoi Theatre in 1974. The celebrated internationally recognized soloists of the opera company of the 1970s - Tamara Milashkina, Vladimir Atlantov, Yuri Mazurok and others - perform the opera in the original language under the prominent conductor Mark Ermler.

Choir and orchestra of the Bolshoi Theatre, Mark Ermler

Milashkina's Slavic vowels won't suit everyone, but she and Atlantov make an ardent pair, with Mazurok a snarling Scarpia in this characterful production.