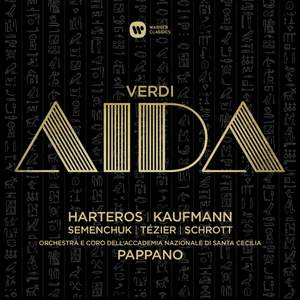 Dance of the Moorish slaves

This magnificent recording of Aida, made in Rome, rises to all the musical and dramatic challenges presented by Verdi’s richly-coloured Egyptian epic. Antonio Pappano, once again proving his mastery of Italian opera, moves between sumptuous grandeur and touching intimacy. The responses of the Orchestra e Coro dell’Accademia Nazionale di Santa Cecilia are both immediate and vibrant, while the singers – Anja Harteros, Jonas Kaufmann, Ekaterina Semenchuk, Ludovic Tézier and Erwin Schrott – do justice to every facet of their roles.

Maestro Antonio Pappano became music director of these Rome-based ensembles in 2005 – and has recorded Verdi’s Requiem, Rossini’s Guillaume Tell and Puccini’s Madama Butterfly with them – but this version of Verdi’s Egyptian-set masterpiece will inevitably represent a landmark. Aida, after all, has a reputation as one of the grandest works in the repertoire, and studio recordings of large-scale operas have become something of a rarity over the past 20 years. The New York Times has predicted that “this will surely rank as one of the most prestigious recording projects of the year.”

The recording was made in February 2015 in the Auditorium of Rome’s Parco della Musica – a superb 2800-seat concert hall, designed by Renzo Piano. The venue was able to accommodate all the spatial effects (such as off-stage chorus and woodwind/brass banda) that Verdi built into his score, and the producer, Stephen Johns, could evoke towering temples and echoing tombs without recourse to electronic trickery.

Antonio Pappano feels that, as conductor, his role is “to become the stage director creating an imaginary production, which is built with the forces and space that you have at your disposal.” He emphasises that, for all its grandeur, particularly in the spectacular Triumphal Scene that closes Act II, Aida is “an intimate piece ... but the intimacy is placed in large spaces.” When it comes to creating Verdi’s richly-coloured sound world, he believes that the Orchestra dell’Accademia Nazionale di Santa Cecilia has “the ideal sound – the cantabilità [singing quality], the drama.”

Pappano has chosen singers who can bring both soaring power and lyrical subtlety to their roles: Anja Harteros as the captive Ethopian princess Aida, Jonas Kaufmann as the Egyptian general Radamès, Ekaterina Semenchuk as the Egyptian princess Amneris, Ludovic Tézier as Aida’s father, the Ethopian king, Amonasro, Erwin Schrott as the implacable high priest Ramfis and Marco Spotti as the King of Egypt.

Shortly after the recording was completed, Pappano conducted a concert performance of Aida with the Orchestra e Coro dell’Accademia Nazionale di Santa Cecilia and the same line-up of principal singers. The sold-out event duly attracted critics from all over the world.

The Sunday Times (UK) wrote that: “Pappano was incandescent, inspiring his orchestra and chorus to marvels of drama in the big scenes, yet also wondrously detailed, revealing textures in this masterly score of breathtaking transparency and delicacy. Aida in the theatre is rarely, if ever, like this.” The Times (UK) judged that: “It’s hard to imagine Aida being better sung today,” and described Anja Harteros as “a rare singer who can bring such exquisite poise to the long, lyrical lines of the music while also riding the orchestra.” Jonas Kaufmann “provided ardour, muscle and Verdian elegance in spades,” while “Ekaterina Semenchuk was a rich-toned Amneris, flashing with haughty glamour ... Ludovic Tézier’s warm-toned Amonasro was another impeccably musical performance and Erwin Schrott was good value as an unexpectedly virile Ramfis .... And underpinning it all, the Orchestra e Coro dell’Accademia Nazionale di Santa Cecilia were guided by Pappano with thrilling theatricality and finesse ... Who needs elephants when the music sounds this good?”

The Italian magazine Musica praised Pappano’s readiness to explore the dramatic extremes of the score – both its violence and its delicacy, while the Austrian newspaper Die Presse found this to be “an orchestrally intoxicating Aida, full of nuances and exciting from the first note to the last” and compared Ekaterina Semenchuk to two powerhouse mezzo-sopranos of the past, Fiorenza Cossotto and Elena Obraztsova.

The French website Forum Opéra declared that this Aida was “the operatic event of 2015 in Rome – and even in the whole of Italy ...

This concert did full justice to a score that is more refined than we often think it to be ... Antonio Pappano brought the drama to life, taking it forward without letting the tension drop for a moment ... the orchestra shone with great clarity and with instrumentalism of the highest quality ... the chorus is one of the best to be heard ... the cast [was] of a standard that is rarely experienced.”

Anja Harteros can boast both the high-octane tone and the necessary level of dramatic expression to make Aida credibly three dimensional…[Ekaterina Semenchuk makes] many subtle observations pertinent to the character's inner emotional world…In Kaufmann's hands 'Celeste Aida' registers as a magnificent soliloquy, and unusually he closes it with the immaculately soft finish Verdi asks for, but which few tenors can actually deliver

This would always have been an event, a major (in several senses) studio opera recording. But it's also a performance absolutely worthy of the attention, and a superb addition to the catalogue.

Pappano’s conducting, indeed, in its combination of disciplined musicianship, red-blooded vitality and echt-Italian lyrical naturalness puts me in mind of Serafin’s 1955 EMI-La Scala Aida—not because the new set is like the old (Pappano’s temple, boudoir and triumphal dance episodes unfold with a vigorous sensuousness unique in my experience of the work, each phrase balletically shaped and ‘breathed’), but because of the Verdian genuineness each manages to communicate from first to last.

The cast really couldn't be bettered today...[Kaufmann's] sublime 'Celeste Aida' sets the tone for a recording that's full of fresh insights and attention to detail whilst never sounding clinical or micro-managed...But in the final analysis the laurel-wreath must go to Pappano's wonderful Santa Cecilia Orchestra, who capture every facet of the score's astonishing emotional and dynamic range.

The playing that Antonio Pappano obtains from the Santa Cecilia Orchestra wonderfully mixes refinement and power – it’s coloured with perfect finesse in the dances towards the end of the first act and in the nocturnal scene-painting that opens the third, while the great triumphal choruses have tremendous presence and energy.

Verdi's epic of Ancient Egypt…comes thrillingly alive here in a superb new recording which could hardly be bettered today…[Pappano] leads the orchestra of the Accademia Nazionale di Santa Cecilia in a reading free of pomp and rhetoric that manages to combine crisp textural clarity with vivid drama. The playing is alert and precise throughout - enchantingly so in the delicious ballet music.

fluid and elegantly dramatic...Kaufmann, in excellent voice, offers a poetic “Celeste Aida”; Ms. Harteros is touching in the title role. But it’s the orchestra, airy and alert, that carries this fresh and invaluable new recording.