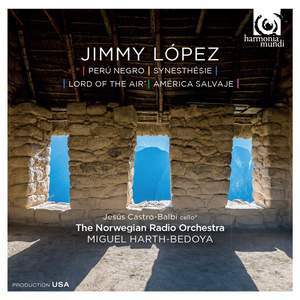 Committed playing by Jesús Castro-Balbi, and unarguably idiomatic response from the Norwegian Radio Orchestra…a disc which seems sure to raise López's profile - and deservedly so. — Gramophone Magazine, August 2015 More…

López, Jimmy: Lord of the Air

I. Leap to the Void

Born in Lima, Peru in 1978, Jimmy López is one of the most admired among the younger generation of South American Composers. His works have been performed by leading orchestras around the world including the Chicago Symphony, Boston Symphony, Philadelphia Orchestra, Orchestre Philharmonique de Radio France, Sydney Symphony, Helsinki Philharmonic and the National Symphony Orchestras of Peru, Argentina and Chile.

Grammy®-nominated and Emmy Award-winning conductor Miguel Harth-Bedoya is currently Chief Conductor of the Norwegian Radio Orchestra/Oslo and just concluded his 15th season as Music Director of the Fort Worth Symphony Orchestra. He is also the Founder and Artistic Director of Caminos del Inka, Inc., a non-profit organisation dedicated to performing and promoting the music of the Americas.

[i"This collection of works spans eight years of creative output, and follows along my journey from Finland to the United States and an increasing interest in the music of my native country... 'Perú Negro' and 'América Salvaje' are firmly rooted in Peruvian folk music, making use of its instruments, rhythms and melodies. 'Lord of the Air', although inspired by the Andean condor, roams free from those musical attachments and constitutes a more direct look into my own harmonic and melodic language. 'Synesthésie', on the other hand, is an exercise in creativity inspired by the human senses and the subtle artistry of the French masters of orchestration. I am deeply grateful to the Norwegian Radio Orchestra, harmonia mundi and Caminos del Inka for placing their faith and trust in this project." Jimmy López

Committed playing by Jesús Castro-Balbi, and unarguably idiomatic response from the Norwegian Radio Orchestra…a disc which seems sure to raise López's profile - and deservedly so.

Virile, noisy and rhythmic, tonal and modal, the music of Peru’s Jimmy López (b.1978) is widely known in America but less so to audiences here...These orchestral works show the influence of Afro-Peruvian music, in the pulsating Perú Negro especially, but López is also an honorary European, having studied at the Sibelius Academy in Helsinki.

López is a fine composer who brings the influences of his native Peru to his own unique style producing music of imagination and brilliance. The Norwegian Radio Orchestra with their Chief Conductor Miguel Harth-Bedoya provide brilliantly played performances. The recording is excellent and there are authoritative and informative notes from the composer.