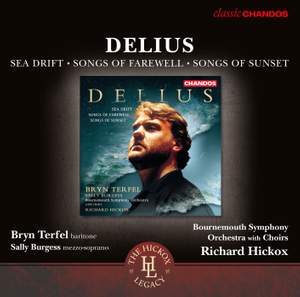 The huge power of Bryn Terfel’s singing was already making waves when he made these recordings aged 27, showcasing both his once-in-a-generation baritone voice and superstar artistry (not least... — BBC Music Magazine, September 2022 More…

No. 1. How sweet the silent backward tracings! (Double Chorus)

No. 2. I stand as on some mighty eagle's beak (Chorus)

No. 2. Cease smiling, Dear! a little while be sad (Mezzo-Soprano, Baritone)

No. 5. By the sad waters of separation (Baritone)

No. 6. See how the trees and osiers lithe (Chorus)

No. 7. I was not sorrowful, I could not weep (Baritone)

No. 8. They are not long, the weeping and the laughter (Mezzo-Soprano, Baritone, Chorus)

This set of Delius’s masterpieces conducted by Hickox was recorded in 1993 and won a Gramophone Award in the choral category the following year, also the Penguin Guide ranking it in the 1000 Greatest Classical Recordings, stating that ‘in this second recording of Delius’s masterpieces Hickox finds even more magic, again taking a spacious view - which keeps the flow of the music going magnetically’.

Both Sea Drift (1903-04) and Songs of Sunset (1906-07) belong to the fertile decade following the turn of the century when Delius had assumed complete maturity and was producing a string of masterpieces. If in Sea Drift it is the emotions of bereavement in the wake of tragedy that are explored, in Songs of Sunset it is the brevity of life as epitomised by the work’s original title, Songs of Twilight and Sadness.

By the time he created Songs of Farewell (1929-30), Delius was blind, crippled and helpless. As a composer he had been mute since the early 1920’s, until the offer from a young musician, Eric Fenby, to be his amanuensis kindled the sparks of creativity once more. Songs of Farewell, for double chorus and orchestra, was the finest achievement of this late harvest.

The huge power of Bryn Terfel’s singing was already making waves when he made these recordings aged 27, showcasing both his once-in-a-generation baritone voice and superstar artistry (not least the sensitivity to words).