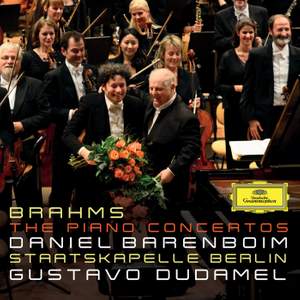 [these accounts] capture on the wing a vibrant partnership between grand maestro at the piano and young lion on the podium…occasional moments of unexpected magic flair up, such as the vibrant... — BBC Music Magazine, November 2015 More…

This album was recorded live at the Berliner Philharmonie in September 2014 with high critical acclaim of the performances. Not only the common South American roots of both artists but also the precise and energetic playing of Barenboim and the “volcanic” temperament of Dudamel make them a “Dream couple”.

Barenboim himself has a very high opinion of Dudamel which he expressed after one of the concerts: “Whenever I had to play myself, I was able to count on him completely. And when I didn’t have to play, it was a joy to see how well he works with the orchestra. I’m well placed to make this observation as I’ve been playing these concertos since 1958.”

After his successful album together with Yuja Wang, this is Dudamel’s second recording as conductor with a soloist.

The second Piano Concerto with its four movements is one of the longest and most demanding concertos ever written and the final Allegretto grazioso features one of the most carefree movements that Brahms ever wrote and which is also notable – in Alfred Brendel’s words – for its “unsurpassable pianistic perversions”.

[these accounts] capture on the wing a vibrant partnership between grand maestro at the piano and young lion on the podium…occasional moments of unexpected magic flair up, such as the vibrant exchange between piano and cellos in the second movement of [the Second Concerto], and I defy anyone to breathe during its slow movement in the minutes before the return of the cello solo (whose player, incidentally, deserves a credit, but doesn't get one).

Like all great Brahms interpreters, Barenboim gives the music space…[the Berlin Staatskapelle] produces a Brahms sound of rare depth and beauty under the direction of Barenboim's chosen collaborator Gustavo Dudamel. Some of the quiet playing has to be heard to be believed.

The second concerto is the more convincing; the first in D minor never really recovers from Dudamel’s leaden treatment of the opening tutti...The B flat concerto has its moments of self-conscious point-making too, but the sense of sweep and wholeness about the performance generally overrides them, and the searching account of the slow movement shows Barenboim and his orchestra at their best.

The sheer grandeur and character of the interpretations is breathtaking...Barenboim clearly still has volcanic power in his fingers, but also the ability to soliloquise poetically and hauntingly in quieter passages. The Staatskapelle players match that with some beautiful sounds...On the other hand, there’s a crushing heaviness at times.