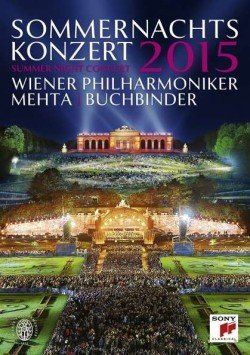 The renowned orchestra presents the world's biggest annual classical open air concert live from their hometown Vienna/ Austria on Thursday, May 14th, 2015 - The Summer Night Concert of the Vienna Philharmonic is an annual open-air event that takes place in the magical setting of the Schönbrunn Palace Baroque park in Vienna with the palace as a magnificent backdrop. Each year up to 100,000 people take up the ifree nvitation. The concert is also broadcast on TV and radio in more than 60 countries, and thus reaches an audience of millions. (Details and airdates follow shortly) In 2015 Zubin Mehta will conduct the Summer Night Concert and pianist Rudolf Buchbinder joins the orchestra as guest-soloist. The Vienna Philharmonic are widely considered to be one of the finest orchestras in the world. Founded in 1842, the orchestra are based in the Musikverein in Vienna. The orchestra have worked with some of the world’s greatest conductors, including Gustav Mahler, Felix Weingartner, Wilhelm Furtwängler, Richard Strauss, Herbert von Karajan, and other eminent names. Specialist marketing activity. The CD was released 1st June, this is the release of the DVD & Blu-Ray formats.