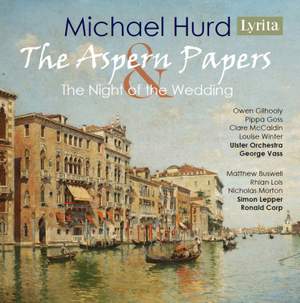 Offer, Michael Hurd: The Aspern Papers & The Night of the Wedding

Hurd: The Night Of The Wedding

Michael Hurd was born in Gloucester on 19 December 1928. He studied at Pembroke College, Oxford (1950-53) with Sir Thomas Armstrong and Dr Bernard Rose and became President of the University Music Society. In addition, he took composition lessons from Lennox Berkeley. Following a six-year term (1953-59) as Professor of Music Theory at the Royal Marines School of Music in Deal, he settled in West Liss, Hampshire, dedicating the rest of his life to a variety of musical pursuits - composing, writing, conducting, lecturing and broadcasting. He travelled widely and was a frequent visitor to Australia where he helped to found the Port Fairy Music Festival which staged the first performances of his last two operas. He died in Petersfield, Hampshire on 8 August 2006, at the age of 78.

The juicy stuff lies in the orchestral writing (beautifully played), often suffused with a wistful melancholy distantly suggesting the moodier film scores of Bernard Herrmann…George Vass's team do all their best for this modest and thoughtful opera.