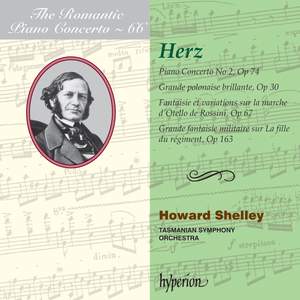 Herz's talent…lay not in profundity but in pleasing the crowds, and he did that exceptionally well…Shelley by turns charms and dazzles…unless your doctor has prescribed some strict froth-free... — Gramophone Magazine, August 2015 More…

Recording of the Week,  Howard Shelley performs works for piano and orchestra by Henri Herz

Henri Herz—as much a phenomenon in 1830s Paris and for the ensuing decades in America as he has been derided since the curtain fell on his world of sparkle—wrote eight piano concertos. One is lost, so it is for the final time in this mini series that Howard Shelley and the Tasmanian Symphony Orchestra here get to put on their finest dancing shoes and perform the Piano Concerto No 2 in C minor (the one with which Herz conquered America in 1846) and three extended fantasies.

Herz's talent…lay not in profundity but in pleasing the crowds, and he did that exceptionally well…Shelley by turns charms and dazzles…unless your doctor has prescribed some strict froth-free diet (and how tedious would that be) I can heartily recommend a dose of Herz.

I found the style strangely reminiscent of Rossini at several times – as if the great operatic master had been a concert pianist instead and written concertante works for the instrument...While Herz's music doesn't shatter the earth or rewrite the musical textbooks, it's incredible to think that he could have fallen into such obscurity – it is full-blooded, melodious, Romantic stuff, expertly and sensitively performed and definitely worth getting to know.