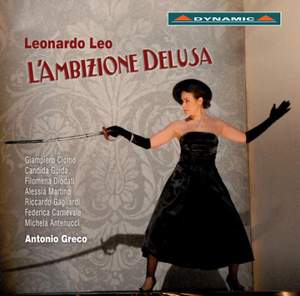 Leo's skilful means of depicting the sentimental comedy through deceptively clever music emerge clearly enough to make one hope that before long his operas might receive proper attention from... — Gramophone Magazine, September 2015 More…

Act I: Badate a me (Delfina)

Act I: A te ritorno (Silvio)

Act I: No! Questa signoretta (Delfina)

Under the banner of a renewed interest in comic opera – at least as far as the opening titles were concerned – the 2013 edition of Martina Franca’s Festival staged the first modern performance of a late work by Leonardo Leo, the 'commedia pastorale' in three acts L’ambizione Delusa, on a libretto by Domenico Canicà.

Leo and Canicà composed a rather extensive work – three acts, more than three hours of music – where the comic element is given, as Daniela Rota writes in the Festival’s booklet, “by the contrast between what the characters really are (goatherds or peasants), what they pretend to be (Barons and Magistrates) and what they wish to become (Lords and Ladies)”.

In addition to the sarcasm that accompanies the foolish ambitions of the main characters, the action is further livened up by the inevitable and variously intertwined love rivalries among them.

This delightful rural comedy plot has as a counterpart truly wonderful music, rich in beautiful and original melodies which, rather than being harmonized, are set by Leo to contrapuntal accompaniments, showing the great mastery the composer had acquired.

Leo's skilful means of depicting the sentimental comedy through deceptively clever music emerge clearly enough to make one hope that before long his operas might receive proper attention from higher-class performers.