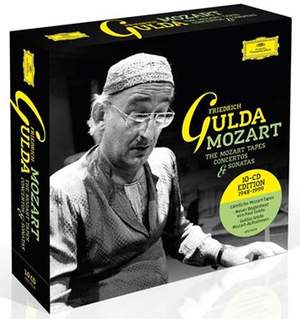 Friedrich Gulda was a special pianist, and nothing says this more clearly than his Mozart recordings for DG. This comprehensive edition documents the development of Gulda’s approach to the music of Mozart from 1948 until his last recordings in 1999.

Taped in 1980, and released for the first time in 2006, the Mozart tapes provide unique testimony to the spellbinding qualities of Friedrich Gulda's approach to the great composer.

He recorded the Mozart sonatas in winter 1980/81 on a characteristic sounding Bösendorfer. The original tapes have disappeared, and a copy Gulda gave to his recording producer Hans Klement is also untraceable. All that survives in usable form are cassette copies of ten of them, plus the Fantasy K.475, which DG have now chosen to release in a 10CD box together with the Piano Concertos under Abbado, the Sonatas released on DG as well as the Early Concerto Recordings on Decca with Anthony Collins and Paul Angerer.

The Sonata in C minor K. 457 is included as a bonus, presenting Gulda duetting with himself at the Clavinova. Together with Sonata in A major K.331, one of his last Mozart recordings ever, this illustrates Gulda’s provoking genius.