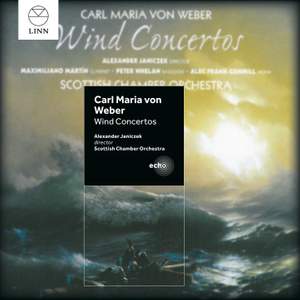 The multi-award-winning Scottish Chamber Orchestra gives its internationally-acclaimed principal musicians a chance to dazzle in Weber's virtuosic and thrilling concertos.

Originally released in 2012, Weber: Wind Concertos has been re-issued as part of Linn’s ECHO series which offers a second chance to enjoy the best of the label’s award-winning catalogue.

Composed at a pivotal time in the instrument's development the Clarinet Concerto is one of the cornerstones of the clarinet repertoire, performed impressively here by Maximilano Martín.

For this performance Peter Whelan has reconstructed a version of the 1822 Bassoon Concerto score rather than employing the commonly used 1865 version.

In a unique twist Alec Frank-Gemmill performs his own version of the cadenza in the virtuosic Horn Concertino famous for its chromatic pitches and the requirement of multiphonic chords.

The Scottish Chamber Orchestra is a world-renowned orchestra whose recordings with conductors such as Robin Ticciati and Sir Charles Mackerras have resulted in multiple accolades and awards.

Spanish clarinettist Maximiliano Martín is rapidly establishing himself as one of the most exciting and charismatic musicians of his generation.

Peter Whelan is one of Europe’s leading exponents of historical and modern bassoon and the founder and artistic director of Ensemble Marsyas.

Alec Frank-Gemmill, recognised internationally for the beauty of his tone, ranks among the finest of a new generation of horn players.