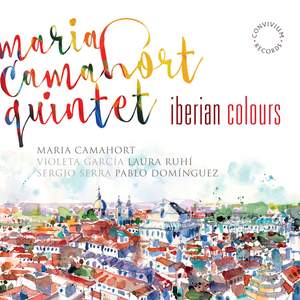 This is a seriously impressive CD, far more probing and affecting than the colourful sleeve art might suggest. Perfect holiday listening, in other words. The production values are impeccable,... — The Arts Desk, 15th August 2015 More…

'Iberian Colours' is a journey through the relationship between Spanish Classical repertoire and influences from Iberia’s traditional music. Traditional music has long been an important source of inspiration for many Spanish composers: de Falla, Mompou, Granados, Albéniz, and Toldrà, to name a few. More intensely since the end of the 19th-century—and especially through the 20th as a consequence of Musical Nationalism—Spanish composers have been inspired by the lyrics, melodies, rhythms and harmonies of traditional music. The guitar dominates this heritage as you might expect. The Maria Camahort Quintet was established in November 2011 out of the desire to increase possibilities in chamber music. Guitarist Maria Camahort arranges the repertoire and leads this project created alongside four other talented musicians. The Quintet has already performed at some of the top venues and festivals such as Kings Place and the Purcell Room. Their debut album ‘Iberian Colours’ is a representation of the vibrancy of Spain in sound, bringing to the audience the musicality, flavour and the histories that are held in the music of Spanish composers.

This is a seriously impressive CD, far more probing and affecting than the colourful sleeve art might suggest. Perfect holiday listening, in other words. The production values are impeccable, with Camahort’s notes a model of scholarly accessibility.