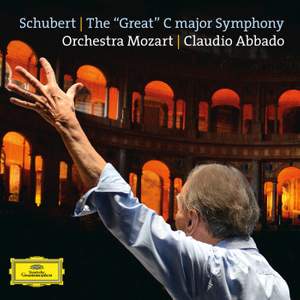 James listens to the late Claudio Abbado's account of Schubert's Ninth Symphony with the Orchestra Mozart.

Announcing a rare new album conducted by Maestro Abbado – still much missed by many in the concert hall and the studio. Schubert remained one of Abbado’s favourite composers throughout his life and since his first performance in Den Haag in 1966 he returned again and again to the “Great“ C Major Symphony.

This very special album combines live performances with Abbado’s beloved Orchestra Mozart, recorded in September 2011. Twenty-five years after his first recording with the Chamber Orchestra of Europe, Abbado's new interpretation of this symphony reveals a wealth of new details, making it his definitive take on the work.

[Abbado] reaches extraordinary heights…every bar surges with energy, thrust, warmth of tone, miraculous detail in even the faster passages and…a huge joy in living, which must leave every sensitive listener stirred to the depths…this is without doubt one of the records of a lifetime.

The Orchestra Mozart presents the symphony at its most cultivated.

Rhythms are kept springy, and there's a freshness and vigour to it that kept me enthralled throughout...Abbado's years of experience, coupled with playing of the highest quality, make this a captivatingly polished recording that I thoroughly recommend!

not only one of the finest on disc, but one of the longest. Abbado observes all the repeats, including the ones usually omitted...Only in the finale does the music drag a bit ... a wonderfully rich and satisfying account of this supreme work.

This is unmistakably a performance that balances Schubert’s last completed symphony right on the cusp of Romanticism. So much of the detail and the way Abbado shapes it here looks further into the 19th century and towards Bruckner...what his performance conveys most powerfully is the sense of a symphony bursting at its classical seams and pushing its expressive language as far as it will go.

Abbado’s approach was always to view a well-known score with a fresh eye, rather than relying on tried and tested formulas. This is exemplified here in the acute clarity of detail and inflection that Abbado elicits from the orchestra, as well as the sophistication of the phrasing and the judicious pacing...An ear‑opening performance.

a reading of the Great C Major that is as remarkable for its robust pacing, ardent phrasing and unflagging energy (especially in the finale) as for the translucent, fastidiously balanced textures that grace almost every Abbado interpretation...A fitting memorial to a master musician.