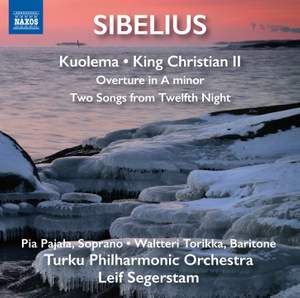 Sibelius: Overture in A minor, JS144

IV. Fool's Song of the Spider

Jean Sibelius was the most significant figure in the formation of Finland’s musical identity. Beyond the famous symphonies and tone poems he was prolific in other genres, including music for the theatre. King Christian II and Kuolema ensured Sibelius’s fame throughout Europe, the latter including the haunting melody (track 2) which would later become the Valse triste. The Two Songs from Twelfth Night contrast the spectre of death with more comical moods, an effect also to be heard in one of Sibelius’s least performed orchestral works, the Overture in A minor. This is the first of a six volume set of orchestral works by Jean Sibelius which sets out to explore his prolific output beyond the core oeuvre of the symphonies and violin concerto. We are delighted to have conductor Leif Segerstam at the helm of this project. Acclaimed for his many recordings with numerous orchestras, Segerstam was awarded the annual Finnish State Prize for Music in 2004, and in 2005 the highly esteemed Sibelius Medal. With the platinum recordmaking and award winning Turku Philharmonic as its superbly firm bedrock, this new recording of Sibelius also presents baritone Waltteri Torikka, one of the most promising new talents in the next generation of opera singers from Finland and named Young Musician of the Year 2014 by the Finnish Pro Musica Foundation. Soprano Pia Pajala is a versatile performer known for her wide vocal range, powerful expression and strong interpretations of Sibelius and Finnish classical music.

Segerstam directs with his customary big heart and acute sensitivity for texture and mood.

Sibelius’s theatre music is more than a sideline of his genius. Some of his most enchanting moments are small movements devised for plays, and the complete incidental music sets offered here (alongside two Twelfth Night songs and a workaday Overture in A minor) are touched with magic.

Segerstam has his Turku Philharmonic playing with both idiomatic, long-focused energy and poignant understatement; he first movement of the music for Järnefelt’s play Kuolema, later published separately as the Valse Triste, has rarely waltzed as sadly or as profoundly as this.

Torikka has an intense presence that brings vivid realism to Sibelius’s settings...Segerstam’s conducting of the Turku Philharmonic in the incidental music to Adolf Paul’s historical play King Christian II possesses a strength of sinew and a frisson of texture that reveal the sincerity and sensitivity of Sibelius’s response to these works of the theatre, with many a pointer to the substance and significance of the seven symphonies.