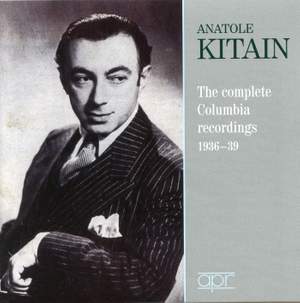 A chance to discover the elegant playing of this largely forgotten pianist. — Gramophone Magazine, August 2015

The Tale of Tsar Saltan, Op. 57: The Flight of the Bumblebee (Arr. J. Strimer for Piano)

Anatole Kitain (1903–1980) was an exact contemporary and fellow pupil of Vladimir Horowitz in Kiev, where he studied, as did the slightly older Simon Barere, with Felix Blumenfeld. All three developed fabulous techniques and were romantic pianists in the grand manner, and each fled Russia after the Revolution to make their way in the West.

That Kitain is the least known can only be put down to misfortune, as these pre-War European recordings attest to a pianist of fabulous talent. Sadly he failed to ‘make it’ after his Wartime emigration to the USA and slowly faded from view, giving his last New York concert in 1963.

A chance to discover the elegant playing of this largely forgotten pianist.