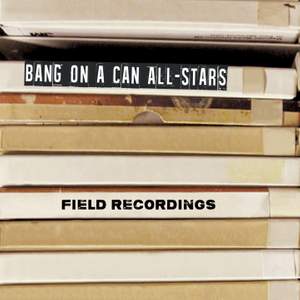 Bang on a Can All-Stars: Field Recordings

Bang on a Can All-Stars

The Cave of Machpelah

Field Recordings, the new multimedia project from the Bang on a Can All-Stars, is as rooted in mystery and experimentation as it is in the collaborative spirit - in the words of composer David Lang, “It’s

a kind of ghost story. We asked composers from different parts of the music world to find a recording of something that already exists - a voice, a sound, a faded scrap of melody - and then write a new piece around it.”

In the capable hands of the All-Stars, Field Recordings taps into film, found sound and obscure audio-visual archives, bridging the gap between the seen and the unseen, the present and the absent, the past and the future.

Concert performances have featured radical new video projections, several of which appear on the bonus DVD, while the 12-track CD consists of commissioned music by some of the most inquisitive and unconventional composers in any genre, from indie art-rock (Nick Zammuto/The Books, Tyondai Braxton/Battles) to electronica (Mira Calix) to post-classical (Michael Gordon, David Lang, Julia Wolfe) to the art world (Christian Marclay).