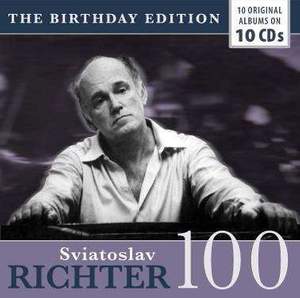 Sviatoslav Richter was unquestionably one of the greatest pianists of the 20th century and this outstanding collection of 10 original albums (with the original sleeves included in a specially priced box) demonstrates perfectly his art. It is released to mark the 100th anniversary of his birth.

The legend surrounding the great Russian pianist began at the end of the 1950s, when the first Richter albums appeared in the West and the musical world began to take notice. The recordings of piano concertos by Rachmaninov (in C minor), Prokofiev (in G major) and Schumann that were made in 1958 are still regarded as true highlights of recording history. All are included here alongside such legendary recordings from the Richter discography as Mussorgsky’s ‘Pictures at an Exhibition’. This 1958 recording of a live performance in Bulgaria is one of the most quoted benchmark versions of what is probably the composer’s most famous work. From the series of recordings made in Russia those of the first two Rachmaninov concertos under Kurt Sanderling (1955 and 1959) are particularly noteworthy. Rachmaninov’s works have a special place in Richter’s repertoire, and the 6 preludes that can be heard here in a much acclaimed recording made in 1959 numbered among his personal favourites. As Richter played chiefly pieces from the romantic repertoire his well-known recording of Brahms’ Piano Concerto No. 2 under Leinsdorf is by no means out of place. Other exceptional recordings of works by Mozart, Liszt, Tchaikovsky, Myaskovsky and Saint-Saëns made between 1952 and 1959 round off this portrait of a truly great pianist.