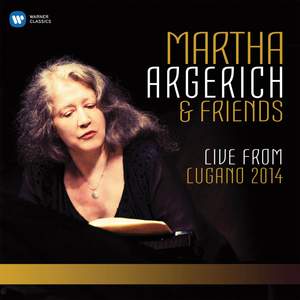 Even more than some years' instalments, Lugano 2014 is a celebration not just of the inimitable Argentinian but also of the most obscure alleyways of classical music…[Weinberg's Fifth Violin... — Gramophone Magazine, August 2015 More…

Scriabin: Fantasy for 2 Pianos in A Minor (Live)

Warner Classics is pleased to release the 12th annual 3CD set of highlights from the Progetto Martha Argerich in Lugano, described in The Times (London), as “community music-making on a deluxe scale, with performers and listeners mutually uplifted by music’s wonders.” The recordings celebrate the musical fruits of a project in which young artists join seasoned performers, including Martha Argerich herself, to explore wide-ranging chamber music and orchestral repertoire, both well-known and rarely heard.

The piano has been at the heart of all Lugano Festival programmes, from the Festival’s inception, in performances of standard repertoire alongside rarely heard compositions and the 2014 season was no exception. Each year the Festival includes a piano concerto with Ms Argerich as soloist and this time it is Mozart’s Concerto No 20 in D minor, K466, with the Orchestra della Svizzera Italiana conducted by Jacek Kaspszyk. Argerich also performs sonatas with each of two long-standing collaborators, cellist Mischa Maisky and violinist Gidon Kremer. She joins Maisky in Beethoven’s Variations on ‘Bei Männern, welche Liebe fühlen’ based on Papageno and Pamina’s duet in Mozart’s opera Die Zauberflöte and Kremer, a champion of the work of Shostakovich’s younger friend and colleague Mieczysław Weinberg, in the composer’s Fifth Violin Sonata.

Other works featured include Darius Milhaud’s jazzy ballet, La création du monde, performed in the composer’s arrangement for piano quintet; Alexander Borodin’s early Piano Quintet; Felix Mendelssohn’s First Symphony, composed at the age of 15, in an arrangement by Ferruccio Busoni for four players at two pianos; and Alexander Scriabin’s Fantasy in A minor, envisaged as a work for piano and orchestra but only sketched for two pianos, and neither orchestrated nor performed during his lifetime.

Few artists have nurtured and promoted emerging young musicians with the level of personal commitment shown by Martha Argerich. In the process, she has created inspired chamber music partnerships mixing established and up-and-coming artists. A legend in her own lifetime for her technical mastery and passionate artistry, Argerich possesses an infectious spirit that has fired her own performances and partnerships as well as those of her colleagues and protégées.

After setting up Meeting Point at Beppu, Japan in 1996 and the Martha Argerich Festival in Buenos Aires in 1999, the pianist decided to create a similar gathering of musical minds in Europe. The southern Swiss town of Lugano was identified as an ideal setting for a project based on the spirit of building a community of close-knit relationships among young and established artists and the Progetto Martha Argerich was launched in 2002. More than a decade later, the Festival continues to retain its original experimental ‘feel’ because of the original programming and the emergence of new performing talents. Geoffrey Norris in The Daily Telegraph wrote, “It is always instructive to see who has been invited to perform at the Progetto Martha Argerich in Lugano, because the cast list is a reliable guide to some of the most exciting talent in the musical world today.”

The fourteenth season of the Progetto Martha Argerich will take place from 10-29 June 2015 and will include performances by many of the artists appearing on these recordings.

Even more than some years' instalments, Lugano 2014 is a celebration not just of the inimitable Argentinian but also of the most obscure alleyways of classical music…[Weinberg's Fifth Violin Sonata] exudes such intensity…brilliantly caught by Kremer and Argerich, the latter letting rip in the final stomping piano chords…a riveting performance, and one of the highlights of a compelling box.

Argerich is on fine form…[there is]much wonderful music...and the best of the performances are uniquely special as ever

Lugano’s Progetto Martha Argerich celebrates its 14th “edition” this year under the charismatic, if sometimes elusive, Argentine Klaviertigress, who gathers a select group of colleagues for chamber-music-making of the highest qualities. As she rarely ventures into the studio these days, it’s a treat to have her first recording of Mozart’s great D minor Piano Concerto.

The music-making always has a tremendous energy and relaxed enjoyment about it, and there’s invariably something unexpected in the compilations...In everything...there’s a sense of specialness, of off-the-cuff music-making of the highest class.

It is indicative of the companionable spirit with which Argerich directs her Lugano project that you can hear her play all sorts of things that lie outside her familiar repertoire...And then there is her customary appearance in a concerto, this time Mozart’s D minor K466...a performance seething with drama.

she is characteristically muscular in the Mozart, forceful in some Beethoven variations for piano and cello (Mischa Maisky gracefully yielding in an unequal battle) and superbly pungent in partnership with Dagmar Clottu in Poulenc’s very Stravinsky-like Piano Sonata for four hands...Best of all, she is a sympathetically wistful partner for Gidon Kremer