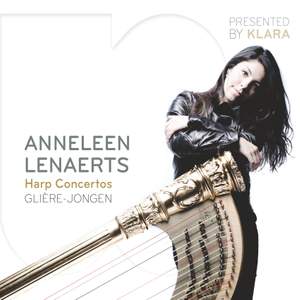 27 year-old Belgian harpist Anneleen Lenaerts is making a name for herself as one of the leading soloists in her field, holding the prestigious post of Principal Harpist with the Vienna Philharmonic since 2010. This, her debut album features Harp Concertos by Reinhold Glière, Joseph Jongen and Joaquín Rodrigo. Anneleen is accompanied in this recording by the Brussels Philharmonic, conducted by Michael Tabachnik. The recording is produced by Belgian classical radio station, Klara.

“I was extremely honoured to receive the Klara Award for ‘Young Talent’ in 2011. I saw this commendation from the radio listeners of Flanders both as a reward for my work and as an incentive to wholeheartedly continue my artistic evolution. The fact that I was also given the opportunity to record with an orchestra was an especially nice gift. This enabled me to select 3 important works for the harp.

Glière’s concerto is very demanding technically, but I love how the romantic harp is allowed to shine in all its facets. The Concierto d’Aranjuez in Rodrigo’s arrangement for harp casts new light on his widely known guitar version. For me the work of Joseph Jongen is the most particular of them all. Without a doubt, Jongen is among the most important Belgian composers, with splendid pieces for the harp. He wrote these entirely for the harpist’s hand, as if he himself played the instrument. Mireille Flour commissioned Jongen to write this concerto, and she was the only one to register it. Both the recording and the concerto itself are practically unknown in the harp world. With the present recording I hope to return this work to the limelight.” (Anneleen Lenaerts)