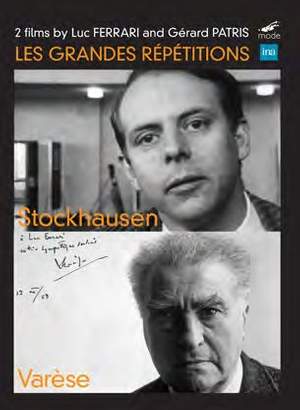 Hommage à Egdard Varèse had been meant to be centred around an interview with Varèse himself but, sadly, the great man died shortly before the film went into production. So Ferrari produced instead... — Gramophone Magazine, September 2015 More…

Between 1965-68, the composer Luc Ferrari collaborated with director Gérard Patris on a series of filmed intimate portraits of great musicians, 'Les Grandes Répétitions' (The Great Rehearsals). Created for the ORTF, and encouraged by its director Pierre Schaeffer, these remarkable films were shown on French TV. They are remarkable not only for their exceptional content, but also for the creative camera work, including dynamic hand-held shots and croppings, and the juxtaposition of music and talk.

Karlheinz Stockhausen: 'Momente' is an extraordinary document. Recorded during rehearsals for the premiere of his monumental work 'Momente' (scored for soprano solo, 2 choirs, orchestra and 2 electric organs) in Cologne, Stockhausen discusses the genesis and meaning of this work dedicated to his wife. The film’s rehearsal sequences, with Stockhausen as conductor, are a revelation as he works out details with the soprano Martina Arroyo, the choir and orchestra. The musical sections are intercut with footage of Stockhausen speaking — often as the camera follows him around the studio — capturing his youthful energy and charisma.

In French & German with English subtitles

Hommage à Egdard Varèse had been meant to be centred around an interview with Varèse himself but, sadly, the great man died shortly before the film went into production. So Ferrari produced instead a profoundly moving obituary featuring a fantasy football team of talking heads…and how valuable it is to have this record of a younger and more playful Stockhausen