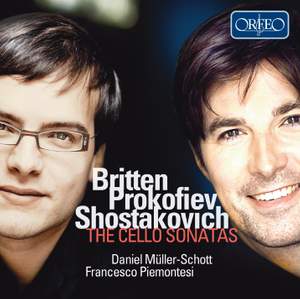 This new CD from Daniel Müller-Schott and Francesco Piemontesi offers three sonatas for cello and piano in compelling, emotional performances.

The songlike Sonata in C major, composed in 1949 makes evident Prokofiev's adjustment to the cultural politics of the Soviet Union to which he had returned just twelve years previously. It was also expressly written for an exceptional cello-piano duo, Rostropovich and Richter gave its first performance, and Müller-Schott and Piemontesi are their worthy successors here.

Dmitri Shostakovich’s Sonata is no less marked by fate. It was on the programme of a concert tour given by the composer, and his cello partner Viktor Kubatsky, in 1936, when Shostakovich was put on the Stalinist index of undesirables, on orders from the very top. This was a tragic irony of fate because this Cello Sonata is highly melodic and anything but modernist in its design, giving lie to the accusation that its composer wrote “chaos instead of music”. Daniel Müller-Schott and Francesco Piemontesi do full justice to all facets of this work – now catchy and playful, now pensive instead.

And finally, Benjamin Britten’s Sonata marked the beginning of a productive creative friendship that was established despite many a problem posed by the Cold War. It was first performed in Aldeburgh in 1961 by the composer and Rostropovich. The five movements of this Sonata are marked by typically Brittenesque twists and turns – at times hesitant, at other times effervescent and skittish, and towards the close ever more lively and unruly in its rhythms. This Sonata offers Daniel Müller-Schott and Francesco Piemontesi ample opportunity to unfold to the full both their technical expertise and their expressive art of interpretation.