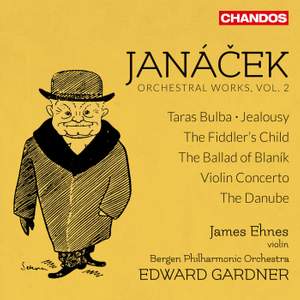 Leader Milina Mandozzi does well to show the way through this mysterious, powerful work [The Fiddler's Child]...These must be difficult works to prepare and indeed to record; both playing and... — Gramophone Magazine, July 2015 More…

Janáček: The Ballad of Blaník

I. Smrt Andrijova (Death of Andrij)

III. Proroctvi a smrt Tarase Bulby (The Prophecy and Death of Taras Bulba)

This is the second volume in our series devoted to the orchestral works of Janáček, with the Bergen Philharmonic Orchestra and Edward Gardner.

The repertoire on this disc includes some of the greatest programmatic pieces by the composer. Unsurprisingly, the first piece featured here is Jealousy – his first declared piece of programme music, originally written to preface the opera Jenůfa but never included in any production of it during his lifetime. Both The Ballad of Blaník and The Fiddler’s Child (also known as a ‘ballad for orchestra’) are characterised by the use of musicals symbols, reflecting the Czech poems on which the pieces are based and also some of the composer’s personal reflections and responses.

The one-movement Violin Concerto The Wandering of a Little Soul is a more mysterious piece, with uncertainties surrounding the title, the date of creation, and the goals of its composition. Like the unfinished Danube symphony, the version recorded here has been reconstructed by Miloš Štědroň and Leoš Faltus from Janáček’s sketches.

An interpretation of the famous tale by Gogol, Taras Bulba was completed in 1915 and was Janáček’s most substantial orchestral work to date. It is inflected with folk dances, battle and horse-riding music, suffering and love, and brought to a grandiloquent apotheosis, in orchestration of almost cinematic vividness.

Leader Milina Mandozzi does well to show the way through this mysterious, powerful work [The Fiddler's Child]...These must be difficult works to prepare and indeed to record; both playing and recording are vividly managed.

James Ehnes is the plush-toned soloist, but it is the intense and gritty playing of the Bergeners, and Gardner’s evident empathy with Janacek, that make this music so compelling and dramatic.

Gardner’s survey with the Bergen Phil taps into his boundless, brazen invention; that uniquely Janáčekian blend of rustic and caustic...Ehnes is a steely, forthright soloist in the Violin Concerto, and the Bergen players offer clean, mercurial momentum.