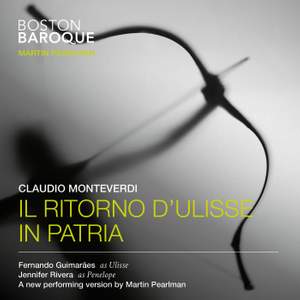 The most impressive performance comes from Aaron Sheehan (as Ulisse's son Telemaco) whose light lyrical voice delivers the music with utter naturalness. — BBC Music Magazine, August 2015, 3 out of 5 stars More…

Il ritorno d’Ulisse is unquestionably one of the three pillars that place Monteverdi among the greatest of opera composers; this recording marks the premiere of a new performing version by Martin Pearlman.

Il ritorno d’Ulisse was a relatively recent discovery, but following its authentication in the 1950s and revivals in Vienna and Glyndebourne, the opera has enjoyed new found popularity.

Martin Pearlman’s new performing version benefits from the same attention to detail that has ensured his reputation as a leading champion of period performance. His highly considered approach to all aspects of the score and performance ensure this version is true to Monteverdi’s original vision.

The three-time GRAMMY-nominated ensemble is widely regarded as ’one of the world’s premier period instruments bands’ (Fanfare).

Boston Baroque's recordings - of which Fanfare magazine wrote ’each one is an incomparable gem’ - are heard by millions on classical radio stations in North America and Europe.

Boston Baroque's many career milestones include the American premiere of Rameau's Zoroastre; a Mozart opera series, and the American period-instrument premieres of Mozart's Don Giovanni and The Magic Flute; and a revelatory exploration of the Beethoven symphonies on period instruments.

The most impressive performance comes from Aaron Sheehan (as Ulisse's son Telemaco) whose light lyrical voice delivers the music with utter naturalness.

Guimarães as a multi dimensional Ulisse exploits his rich middle register. Jennifer Rivera deftly conveys the predicaments of the long-suffering Penelope...Pearlman's vision does not offer perfect answers but no individual performance has ever got everything right.

The strength of this issue is in its strong, youthful cast. The Penelope of Jennifer Rivera almost shakes my allegiance to Jacobs’s Bernarda Fink, with a limpid low mezzo of comparable beauty and expressive power, while Fernando Guimaraes’s Ulysses is heartbreaking in the moving recognition scene with Aaron Sheehan’s boyish Telemachus and Daniel Auchincloss’s devoted Eumaeus.