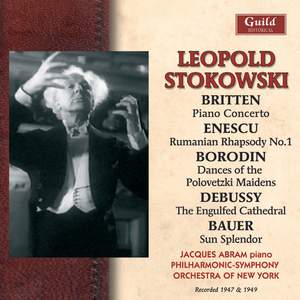 Leopold Stokowski conducts music by Britten, Enescu and others

Borodin: Dances of the Polovetzki Maidens

The extensive collection of recordings on the Guild label conducted by Leopold Stokowski has garnered world-wide acclaim from the most knowledgeable critics, and this new release is sure to join the list of widely-welcomed recordings of the master. Three very well-known orchestral pieces open the programme, which features the New York Philharmonic throughout, and which in turn reveal the Maestro's legendary command of orchestral colour and internal balance. But the disc is enhanced by the world premiere performance of the legendary score, Sun Splendor, by the unique American composer and musicologist, Marion Bauer, and a wholly exceptional account of Britten's Piano Concerto - the first American broadcast of the work, no less - played by the dazzling American virtuoso Jacques Abram, who, under Stokowski's inspired direction, delivers a performance of considerable virtuosity and distinction.