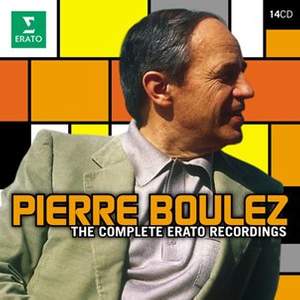 Carter, E: Mirror on Which to Dwell

Boulez: Sonatine for flute and piano

Exploring 20th century repertoire – both acknowledged masterpieces and new discoveries – this 14-CD anthology reflects the diverse aesthetic strands of Pierre Boulez’s programming over the course of his ground-breaking and influential career. These Erato recordings, made between 1966 and 1992, feature composers otherwise absent from Boulez’s discography – Xenakis, Donatoni, Grisey, Dufourt, Ferneyhough, Harvey and Höller – and the first CD release of the interpretation of Stravinsky’s incantatory Les Soucoupes in the version for female voices and four horns.

Pierre Boulez – the French composer, conductor and theorist who so powerfully influenced the world’s musical life in the second half of the 20th century – turns 90 on March 26th 2015. For more than 60 years he has exemplified the spirit of Modernism in music.

This 14-CD anthology comprises recordings Boulez conducted for the Erato label between 1966 and 1992. Exploring the diverse aesthetic strands of his programming, it makes a distinctive survey of music in the 20th century. The repertoire ranges from two founding masters of Modernism – Stravinsky and Schoenberg – through Boulez’s teacher, Messiaen, and the American Elliott Carter (born 17 years before Boulez) to composers of Boulez’s own generation – Berio, Ligeti, Xenakis and Kurtág – and composers of the generation that followed him, such as Hugues Dufourt, Brian Ferneyhough, Jonathan Harvey and York Höller. The three CDs of Boulez’s own music contain some of his most celebrated works, including Pli selon pli, Le Visage nuptial and Le Soleil des eaux – all works for solo female voice and instruments.

Music by Xenakis, Donatoni, Grisey, Dufourt, Ferneyhough, Harvey and Höller does not feature elsewhere in Boulez’s extensive discography, while his interpretation of Stravinsky’s incantatory Les Soucoupes, in the version for female voices and four horns, has never before appeared on CD.

Pierre Boulez was born in Montbrison in the Loire. After starting off as a mathematician he went to study music with Olivier Messiaen in Paris, also taking lessons in 12-tone technique with René Leibowitz (a pupil of Schoenberg and Webern). He began to achieve celebrity as a composer while still in this twenties with music that both assimilated and defied the influence of Messiaen and of such giants of Modernism as Stravinsky and Schoenberg.

In the 1950s Boulez became active as a teacher at the famous contemporary music summer school in Darmstadt and later became a visiting professor at Harvard University. In the mid-1970s in Paris he founded the instrumental group Ensemble intercontemporain and also launched IRCAM (Institut de Recherche et Coordination Acoustique/Musique), which focuses on electro-acoustic music. Among the composers who worked with Boulez at IRCAM are Jonathan Harvey and York Höller

His teaching has continued in more recent years, notably, since 2002, as Composer-in-Residence at the Lucerne Festival.

As a conductor, Boulez has focused primarily on music of the 20th century. He is especially known for his interpretations of his own music and of Schoenberg, Berg, Webern, Debussy, Ravel, and Stravinsky, but he has also conducted major composers of the 19th century, including Berlioz, Beethoven and Bruckner and Wagner – famously, he conducted the centenary production of Der Ring des Nibelungen at the Bayreuth Festival in 1976. He has been Principal Conductor of New York Philharmonic Orchestra and BBC Symphony Orchestra and has enjoyed a long association with the Cleveland Orchestra. Other orchestras he has conducted include the Chicago Symphony, the Vienna Philharmonic, the Berlin Philharmonic, and the Los Angeles Philharmonic.

Among the other distinguished artists who feature in this collection, many of them particularly noted in 20th century repertoire, are: pianists Pierre-Laurent Aimard, Yvonne Loriod and Peter Serkin; singers Phyllis Bryn-Julson, Ann Murray, Felicity Palmer, Anthony Rolfe-Johnson and Simon Estes; in an acting role (in Stravinsky’s L’Histoire du Soldat), Patrice Chéreau, who directed the centenary Ring des Nibelungen that Boulez conducted at the Bayreuth Festival in 1976; flautist