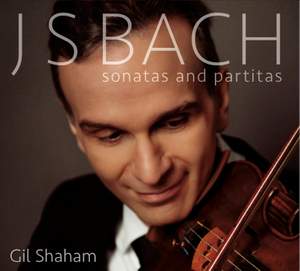 Shaham opts for a more Baroque set-up with its distinctive timbre and lighter bow strokes, which wouldn't matter much if the musical approach wasn't so thoughtful, but it is. Shaham likes the... — CD Review, 21st March 2015 More…

J.S. Bach’s Sonatas and Partitas for solo violin are considered by many as the pinnacle of musical achievement, arguably the composer’s most demanding and emotionally penetrating works. After living with, reading about, listening to and playing these seminal works for over 30 years Gil Shaham offers a fresh and vital new perspective on these works, undertaken in 2014 as part of his Artist-in-Residence with Symphonieorchester des Bayerischer Rundfunk.

Bach is a composer who has influenced every generation of composer and musician. Here Shaham’s insight and bold originality speaks to his willingness to take interpretative risks, while his innate musicianship and warmth – what Musical America calls his “special kind of humanism” – ensures that his performances bring out the partitas’ dancing rhythms along with their soul. ‘I find the music an amazing spiritual experience. There’s something very uplifting about this music’, says Shaham.

These works have been part of Shaham’s concert programmes for over 10 years and for this recording he has decided on a ‘more Baroque set-up’ opting for a Baroque bridge, Baroque bow and 3 of 4 strings being gut.

When asked what effect this set-up has on his interpretation Gil indicated that ‘it changes every stroke, but it doesn’t really change general ideas of interpretation. You can do everything with both sets of bow and bridge, although some things are easier with the modern bow, some with the Baroque one. The “small softness” (coined by Leopold Mozart) is easier with the Baroque bow.’

The tempos Gil Shaham has settled on in this recording are also quite different from what one might expect. Shaham takes inspiration from other works by Bach, as he explains; ‘if you compare the French minuet from Partita No.3, with say the minuet from a French suite, or even the famous ‘Anna Magdalena’ minuet I found myself asking myself wouldn’t it work better at the same tempo as the others? The Baroque bow is lighter and is easier to play faster.’ The deluxe package comes complete with Shaham’s insightful views on these works in discussion with former Strad Magazine editor Ariane Todes.

Gil Shaham remains second to none in the masterworks of the mainstream violin repertoire, and here offers a recording of bold originality in what is one the most unforgiving of old-school challenges: that of playing solo Bach.

Shaham opts for a more Baroque set-up with its distinctive timbre and lighter bow strokes, which wouldn't matter much if the musical approach wasn't so thoughtful, but it is. Shaham likes the way Bach's dance music swings with the slightly faster tempos...Musically I have been finding a lot to enjoy and admire in these performances.

Right from the opening notes the listener is thrown...Shaham has taken up Baroque-style bow and gut strings, but this is no typical period style. Long years of playing Bach’s six great solo works for violin have led Shaham to a personal and free way of playing, as if he is improvising.

Shaham’s playing is so clean, clear and precise, and the thought behind everything he plays so unassailable, that to listen to it is to feel safe with music …it is impossible to listen to it without having a positive artistic experience.

his tempi are surprising in some cases – often on the fast side of what I'm used to...It's all too easy to adopt a reverent playing style when tackling cornerstones of Bach's output, and the sense of fun can sometimes be a casualty of this. Shaham's great achievement in these works is to put the dance back into the music.

Tempi are fast – easier to negotiate on a lighter, baroque bow – and vibrato, though audible, is more restrained. He brings out inner voices vividly, though the ornamentation may be too fussy for some. The mighty Chaconne sounds almost too robust, but his sense of structure is never in doubt.

The result sounds experimental, yet inquisitive, sometimes risky, and occasionally odd in the choice of ornamentation; but never is it routine, or worse, facile. The greatest surprise are the three fugues: Shaham charges through their interweaving poliphony, making them a thrilling experience. And the monumental Ciaconna is not imbued with false pathos, but appears as a vigorously building improvisation.