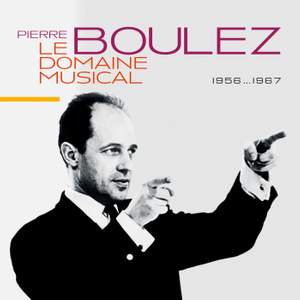 Boulez: Sonatine for flute and piano

Webern: Cantata No.1 for Soprano Chorus and Orchestra op.29

For the occasion of Pierre Boulez’ 90th birthday on 26 March 2015, Universal Classics France present a revised and enhanced version of the former edition celebrating his years at the helm of Paris’ legendary “Le Domaine Musical” concerts. Initially presented in two volumes, the recordings are now assembled in a single 10CD set, documenting the history of the Domaine Musical with a mixture of live concert recordings and studio sessions based upon the performances in the Théatre Marigny in Paris, many of them conducted by Boulez himself.

The former couplings have been preserved: as well as the recording of the 10th anniversary concert with works by Stockhausen, Berio, Boulez and Messiaen that was held in 1964 (CD1), there are discs devoted to Boulez (CD2), to earlier French music (CD3), to contemporary composers as Kagel, Nono, Henze and Pousseur (CD4), to Igor Stravinsky (CD5) and to the composers of the second Viennese school, Schoenberg, Webern and Berg (CDs 6-8).

Two bonus discs accompany the set: CD9 includes the first release on CD of Gabrieli’s Canzone 5 & 3 from the Sacrae Symphoniae and Stravinsky’s Symphonies d’instruments à vent conducted by Rudolf Albert during the 3rd concert of the Orchestre du Domaine Musical, as well as a Boulez performance of Jean-Claude Eloy’s Equivalences; CD10 takes up an interview with Pierre Boulez by French journalist and critic Claude Samuel, done exclusively for the first release of the Domaine Musical edition in 2006.

The 10CD limited edition box set including 2 Bonus CDs along with a 112pp booklet including introductory notes by Claude Samuel and English translation of the CD interview.