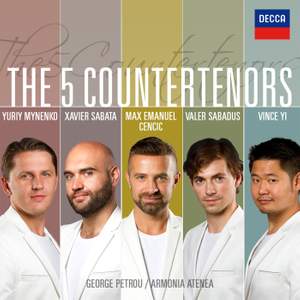 [Yi's] super-refined delivery works wonderfully against Yuriy Mynenko’s persuasively virile athleticism. Xavier Sabata is the least overtly flamboyant of the five, though his dark alto and exceptional... — The Guardian, 2nd April 2015, 3 out of 5 stars More…

‘The 5 Countertenors’ draws together five of the world’s most renowned countertenors, who bring the rich world of baroque opera to life.

Described in their heyday as “beyond all creatures upon earth.” (William Congreve, 1700), countertenors are once again firmly established on concert platforms, opera stages, the covers of music magazines - and the subjects of heated on-line debate and of fan-pages on social media.

These world-class performers showcase the expressive variety of this unique genre. This album also celebrates the individuality of each singer’s voice and in turn the art of the countertenor. The countertenors are accompanied by the brilliant, ECHO-Klassik winning baroque group, Armonia Atenea, under George Petrou.

Some freakishly high and squeaky moments aside, it’s an enjoyable collection of stonking baroque arias, mostly fast and virtuosic.