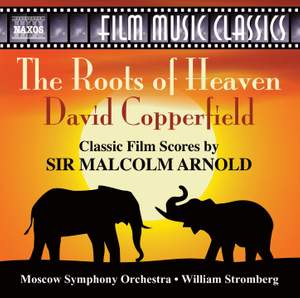 Arnold: The Roots of Heaven (restored by J. Morgan)

Memories of Dora and Steerforth

In Search of Emily

A legend in British concert halls, Sir Malcolm Arnold was also in demand as a composer of film music in Hollywood and beyond. Including an overture for the New York première, the score for The Roots of Heaven adds drama and atmosphere to the story of one man’s crusade to save African elephants from extinction. David Copperfield was Arnold’s last film score and one of his most expressive and memorable, summed up as ‘truly amazing’ by director Delbert Mann. ClassicsToday.com has described this recording as ‘a treat for Arnold fans and movie buffs alike.’