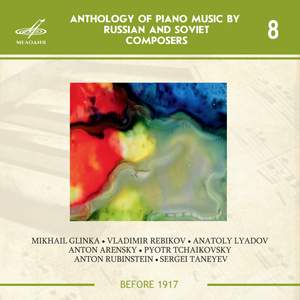 Anthology of Piano Music by Russian and Soviet Composers

Glinka: A Greeting to My Native Land: I. Souvenir d'une mazurka

This eighth disc of the Anthology of Russian Piano Music is dedicated to the roots of Russian piano school and encompasses the first hundred years of its development in the 19th and early 20th centuries.

The acknowledged Russian classical composers Glinka, Tchaikovsky, Taneyev and Lyadov are here (represented with rarely performed works though), along with little known or now completely forgotten composers such as Rubinstein, Rebikov and Arensky.

A unique journey across the pages of lyrical and dramatic traditions of Russian pianism allows us to see how general European trends of piano music were combined with national attributes of domestic culture. Taneyev’s Prelude and Fugue in G sharp minor is a climax of the album – a grandiose polyphonic cycle, one of the peaks of Russian music of the pre-revolution period.

The works of the Russian composers are performed by young pianists - graduates of the Moscow Conservatory and prize-winners of prestigious international competitions, who are worthy representatives of a new generation of Russian music performing school – Vyacheslav Gryaznov, Alexei Chernov, Mikhail Turpanov, Rustam Khanmurzin and Nikita Mndoyants.