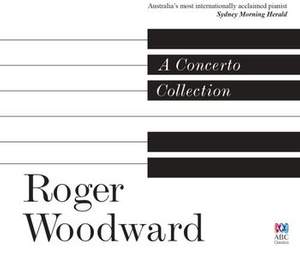 Roger Woodward has established himself as one of the most revered pianists of our time. Britain’s daily newspaper The Independent reviewed his recording of JS Bach’s Well Tempered Clavier, released in 2009, indicating it was ‘the most significant since Glenn Gould’s revolutionary completion of the sequence.’

His rise to international prominence was, in part, Roger’s total absorption with contemporary music which has led to notable collaborations with composers such as Iannis Xenakis, Olivier Messiaen, Karlheinz Stockhausen, Pierre Boulez and Toru Takemitsu. He has many contemporary works dedicated to him including works by Xenakis, Feldman and Australian’s Larry Sitsky and Barry Conyningham, whose works on this set - Piano Concerto No. 1 (Sitsky) and Southern Cross (Conyningham) - are dedicated to the pianist.

This collection presents over 7 hours of recordings, many of them never heard before, including Xenakis’ formidable Kraanerg lasting over 70 minutes. Additionally it brings together seminal interpretations of the Baroque, Classical and Romantic repertoire.

The set features leading international conductors including Charles Dutoit, Edo de Waart, Diego Masson and David Porcelijn. Roger has an extensive discography of over 80 recordings, 10 for ABC Classics including recordings of Skryabin, Takemitsu, Debussy and Chopin. He has appeared at the BBC Proms in London nine times, directed numerous festivals the world over including France, Austria and his native Australia. He has lived in the USA since 2000 and is currently Professor of Keyboard Performance Practice at the College of Liberal and Creative Arts, California State University.