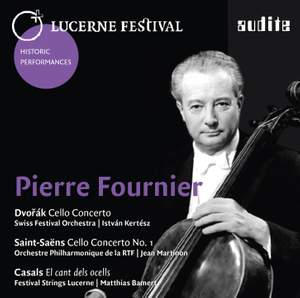 The great cellist in Lucerne Festival broadcasts, slightly outshone in the Dvorak by the orchestra under Istvan Kertesz but joyfully fluent in the Saint-Saëns. — BBC Music Magazine, Awards Issue 2015, More…

Pierre Fournier (1906-1986) was one of the most eminent cellists of the generation after Pablo Casals. Praised as an “aristocrat of cello playing”, he was admired for his soulful, singing tone, his uncomplicated elegance and his refined sound. This disc presents three live recordings from this legacy, recorded at Lucerne Festival and all of them released for the first time.

Together with István Kertész, Fournier performed a piece of his core repertoire in the summer of 1967: Dvorák’s Cello Concerto in B minor – a particularly noteworthy archive discovery since the conductor’s tragically early death had prevented him from making a studio recording of the concerto. This live recording preserves the unpredictable emotional value of the concert situation: Fournier and Kertész take many risks, preferring the high definition of separate sounds as well as fresh tempi, without any temptation to fall for folklore frenzy or sentimental melancholy. Camille Saint-Saëns’ First Cello Concerto in A minor was held in low esteem for decades, despite composers such as Rachmaninov and Shostakovich declaring it “the greatest of all cello concertos”. It was not revived until the 1950s, not least thanks to its advocacy by Pierre Fournier. In 1962, alongside Jean Martinon and the Orchestre Philharmonique de la RTF, he presented a passionate reading of the work, permitting a telling comparison to his previous studio recording. A new item in Fournier’s discography, however, is the 'Cant dels ocells' which he played in 1976 at a memorial concert on the centenary of Pablo Casals’ birthday: this was also his last appearance at Lucerne Festival. Fournier’s brief announcement before this work has been included here: in it he pays tribute both to Pablo Casals – whose cello version of the old Catalan Christmas carol became an obligatory constituent of his concerts and a secret hymn for all refugees and emigrants longing for home – and also to the cellist and composer Enrico Mainardi, who had died only a few months previously, on 10 April 1976.

The great cellist in Lucerne Festival broadcasts, slightly outshone in the Dvorak by the orchestra under Istvan Kertesz but joyfully fluent in the Saint-Saëns.

exceptionally fine performances. Additionally admirers of Kertesz will find he is as perceptive a Dvořákian in the concerto as he was in the symphonies and tone poems.