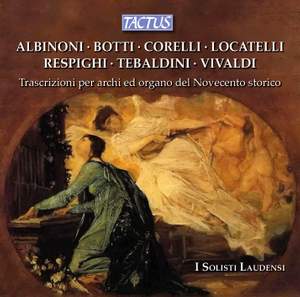 Transcriptions for Strings & Organ of the Historical 20th Century

Fine romantic playing, and an antidote to baroque authenticity — Choir & Organ, May 2015, 5 out of 5 stars

We study the ancient masters, not because they are ancient, but because they are new: this was written at the end of the nineteenth century by Luigi Torchi, one of the fathers of Italian musicology. The manly voice of Giovanni Pierluigi da Palestrina, the supremely divine Claudio Monteverdi and, above all, the sublime Girolamo Frescobaldi inspired the “musical Renaissance” that exalted the Italian genius and its fruitful artistic nature, not without a tinge of nationalism. Among the many musicians who engaged in the rediscovery and divulgation of the masters of the past, the most notable were the organist Marco Enrico Bossi, the violinist Mario Corti, the pianists Felice Boghen and Mario Vitali, and the composer Ottorino Respighi. From the ancient masters, Italians drew inspiration also for experimenting with new musical languages imbued with a neoclassical taste, following Giuseppe Verdi’s memorable words: return to the old and you will be progressing. While from the point of view of performance it was quite unusual for musicians to feel the need to use period instruments, and the application of an adequate performance practice was more or less disregarded, we must acknowledge that the musical texts were read and revived in a far from fruitless manner. The addition of dynamic nuances and agogic directions, the determination of fingering in order to obtain a definite phrasing, and the integration of notes and orchestration, all helped to achieve a re-creation of the ancient scores, metamorphosing them and opening up surprising vistas. From their original terseness, the ancient scores emerged in an expanded state, thanks also to the power of the modern violin, the sumptuous sonorousness of the piano, the new resources of the reformed organ, and the inexhaustible variety of sounds of the modern symphonic orchestra. In short, what some people now unfairly regard as arbitrary was actually the outcome of one of the duties of musicians that had been established since ancient times and led them to act on the scores with a freedom that verged on creativeness, integrating the composers’ thought with new timbric angles, and even adding further elements through forays into the fanciful area of improvisation.

Fine romantic playing, and an antidote to baroque authenticity