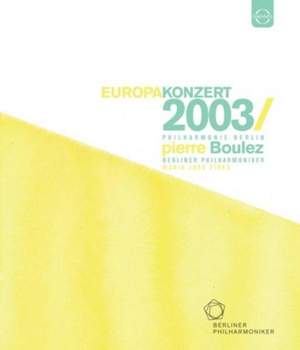 The founding of the Berliner Philharmoniker on the 1st May in 1882 is annually celebrated with a concert in a European city of cultural significance.

As has been done every year since 1991, in 2003 the Berliner Philharmoniker commemorated their founding by performing at the Mosteiro dos Jerónimos, the former Hieronymite monastery in the vicinity of Lisbon.

This performance features great artists, such as pianist Maria João Pires, who is known as one of the greatest Mozart interpreters of our time, and is joined by maestro Pierre Boulez.