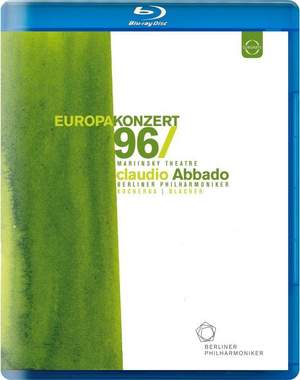 Tchaikovsky: The Nutcracker: Waltz of the Flowers

The founding of the Berliner Philharmoniker on the first of May in 1882 is annually celebrated with a concert in a European city of cultural significance. In 1996 the Europakonzert took place in the Mariinsky Theatre in St Petersburg.

The Mariinsky Theatre in St Petersburg ranks among those opera houses that may well deserve to be called 'legendary'. It was here in this very theatre that many of the Great Russian operas received their premieres and where the Berliner Philharmonisches Orchester performed exactly 100 years ago for the first time, on the occasion of Tsar Nicholas II's. Coronation.

The Berliner Philharmoniker under the baton of Claudio Abbado celebrated 'their' anniversary with Russian favourites, which are complemented by two of Beethoven’s Violin Romances and his Seventh Symphony.

Kolja Blacher – the solo violinist – was the first concertmaster of the Berliner Philharmoniker between 1993 and 1999.

Renowned bass baritone Anatoly Kocherga, whose international career began under Claudio Abbado at the Wiener Staatsoper in 1989, is the vocal soloist on this recording.