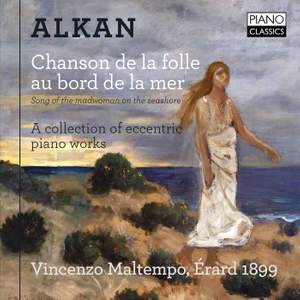 A collection of eccentric piano works

Maltempo is once again every inch the virtuoso, brimming over with zest even when Alkan's demands are sufficiently ferocious to cause him momentary strain…[he] is brilliantly attuned to an outsider,... — Gramophone Magazine, May 2015 More…

“Maltempo is much, much more than just an Alkan specialist.” Andrew Clements, The Guardian

This is Vincenzo Maltempo’s 5-th Alkan CD, establishing himself not only as the Champion of Alkan’s music, but as a formidable musician, a pianist of extraordinary power, sensitivity and intellect. This Alkan recital presents some of Alkan’s quirky and eccentric works, not necessarily of epic proportions (like his 12 Etudes in the minor key Op. 39), but often on a small scale, concentrating manically on a single idea, creating a hallucinatory and mesmerising effect (or simply hilarious…). The title song, the Song of the Mad Woman on the Seashore, creates in just a few minutes and just a few notes a profound feeling of alienation. Other pieces on this fascinating disc are the Trois Petits Fantaisies Op 41, Le Tambour bat aux Champs, Laus Deo, Capriccio alla Soldatesca, Minuetto alla Tedesca.

Maltempo plays on a magnificent Érard Grand Piano from 1899, lending a special feeling of authenticity to his playing.

Maltempo is once again every inch the virtuoso, brimming over with zest even when Alkan's demands are sufficiently ferocious to cause him momentary strain…[he] is brilliantly attuned to an outsider, bleak and uncompromising beneath his surface extravagance. Piano Classics' sound is excellent and Maltempo proves himself a true champion of the near-impossible.