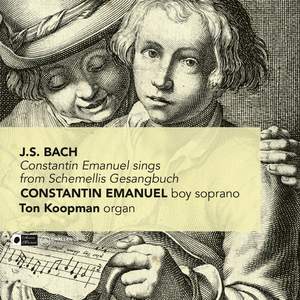 This recording of the “Musicalisches Gesang-Buch”, a set of songs published by the 18th century German composer Georg Christian Schemelli’s but more regularly attributed to J.S. Bach, features the highly-talented 15 year old boy soprano Constantin Emanuel. He is accompanied on organ by the great baroque keyboard player and early music specialist Ton Koopman.

18th century German composer Georg Christian Schemelli is known to us primarily because of the book of songs “Musicalisches Gesang-Buch”, which was published in Leipzig in 1736. This book contains 954 songs, 69 of which have melodies and a figured bass. It was long assumed that Johann Sebastian Bach, who is mentioned in the preface to the volume, played a major part in the completion of these songs, or at least in writing the figured bass lines, and they are included in the corpus of the BWV catalogue.

This CD displays the talents of the singer Constantin Emanuel. Although he had recently turned 15 Constantin Emanuel is still singing as a boy soprano, something quite unusual these days but absolutely normal in Bach's time, when boys' voices would often break at around the age of 16. This type of voice is rarely heard these days, the most recent being that of Sebastian Hennig whose voice can be followed from the age of 11 through to 15 on many of Gustav Leonhardt's recordings of Bach cantatas.