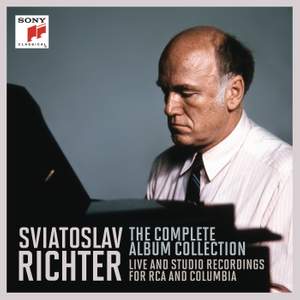 I. In tempo d'un menuetto

I. In tempo d'un menuetto

Applause Part I for Sviatoslav Richter

Sony Classical celebrates the art of Sviatoslav Richter and his 100th anniversary on 20th March 2015 with the first-ever release of his complete Columbia Masterworks and RCA Victor Richter was already a legend in his native Soviet Union when he performed in the West for the first time in 1960. Richter’s American tour that year not only consolidated the pianist’s international reputation, but also resulted in memorable Richter’s legendary five October 1960 Carnegie Hall recitals showcased the breadth of his repertoire from Haydn and Beethoven to Debussy and Rachmaninoff, with one programme devoted to Prokofiev, with whom Richter worked closely.