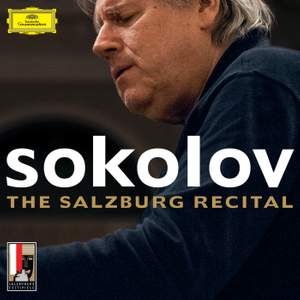 he plays [the Mozart] with restraint, albeit micromanaging the music so that no phrase sounds the same twice...[in the Chopin] Sokolov ranges from introspective musing to his native Russian virtuosity. — Financial Times, 31st January 2015, 3 out of 5 stars More…

Recording of the Week,  Grigory Sokolov performs Mozart and Chopin

At last - after 20 years - the maestro has agreed to allow his recordings to be released on CD - now as an exclusive DG artist. Regarded as one of the world’s leading pianists, and adored by his public in sold-out concerts, Grigory Sokolov is the real thing – an artist dedicated to his art, and nothing else.

he plays [the Mozart] with restraint, albeit micromanaging the music so that no phrase sounds the same twice...[in the Chopin] Sokolov ranges from introspective musing to his native Russian virtuosity.

It's an overused word, but he is inimitable. His Chopin Preludes, for example, have no time for the notion of a freely Romantic melodic line being kept in check by a Classical accompaniment...The Mozart is treasurable too, though - of course - you have to take it on its own terms.

For me, the Mozart sonatas exemplify the essence of Sokolov's playing: he can do things with a melody that are just amazing. The way he phrases Mozart's slow movements is a joy to hear: thoughtful and individual without being fussy, he makes those melodies sing in a way that is incomparable...This gift for lyricism is equally present in the Chopin...I simply cannot wait to hear more from this stunning artist.

Some of the playing is breathtaking in its clarity, articulation and colour...The Mozart playing may seem old-fashioned, but it overflows with vitality, each movement conceived as a single, sweeping entity, while each of the Chopin Preludes manages to conjure up a complete expressive world in a miniature frame...It’s all to treasure.

listening to Sokolov, you know unequivocally that you are in the presence of someone extraordinary, someone possessing special insights and a thoroughly individual way of articulating, clarifying and communing with music so that his interpretations seem to find its very heart.

From the beginning of Mozart’s F major sonata, K. 280, the first of two included, the Sokolov spell is cast. The graceful, crisp articulation; the little hesitations, so carefully wrought: here is poetic and intimate playing of the highest order.

Best of all are the six encores: exquisite Scriabin, wistful Chopin and a valedictory Bach chorale.