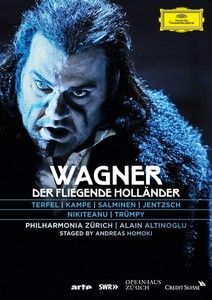 an excellent musical performance, with Bryn Terfel at his finest, and Anja Kampe as an inspired Senta. The veteran Matti Salminen still sings sumptuously as Daland, indeed every member of the... — BBC Music Magazine, April 2015, 5 out of 5 stars More…

This is the first time in the 25 years of Bryn’s work as an opera singer that he has recorded this milestone in Wagner’s work. Classical magazine Oper aktuell acknowledges that you do not want to experience anyone other than Bryn Terfel as the Holländer, now that this production is out

Bryn is surrounded by a stellar cast and crew: the head of the Zurich opera Andreas Homoki staged the production, renowned French conductor Alain Altinoglu takes the musical lead, and Matti Salminen – a living legend on the world’s opera stages – personifies Daland, with Anja Kampe as Senta .

This exceptional recording was made at the Zurich opera house in January 2013.

an excellent musical performance, with Bryn Terfel at his finest, and Anja Kampe as an inspired Senta. The veteran Matti Salminen still sings sumptuously as Daland, indeed every member of the cast, and the fine chorus, are impressive. So is Alain Altinoglu's conducting...It's just a pity about the misguided conceit of contemporary directors.