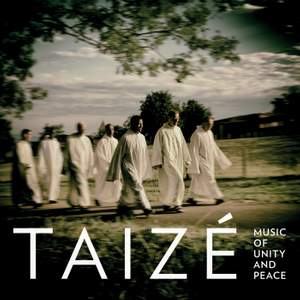 The Bells of Taizé

Taizé: Let All Who Are Thirsty Come

Music – music written especially for Taizé - plays a central role in the life of the Taize community; songs are sung in many languages, so as to include people and traditions worldwide. The recording is an extraordinary collection of the most beautiful chants and songs of the Taizé community, performed by the Brothers themselves and – for the first time - a hand-picked choir of young visitors on their annual pilgrimage.

At the very heart of this beautiful music is simplicity, repetition and congregation. It is music to enjoy and share, but also to sing to, and meditate to. It transcends religion, and has hypnotic, relaxing and reflective qualities that can speak to a wide and non-religious audience – you will receive a PlayMPE in the upcoming weeks

This album marks the very first collaboration of this world-renowned Christian community with a major label, and is set for release ahead of the special double anniversary year in 2015: the centenary of Taizé’s founder, Brother Roger, and the 75th anniversary of the community itself.