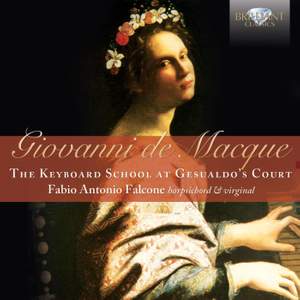 This release presents a fascinating view of the cultural life of early 17th century Naples. The aristocracy surrounded themselves with artists of the highest calibre, and music was an essential part of the entertainment of the happy few.

The 25 works by 8 different composers on this CD are drawn from the famous ‘Luigi Rossi Manuscript’ from 1617. The most influential figure was Giovanni de Macque, whose complex polyphonic works full of daring chromatism had great influence on composers around and after him: Trabaci, Dall’Arpa, Lambardo, Stella and Gesualdo.

Fabio Antonio Falcone, a passionate musician and scholar, selected several historical instruments to perform these keyboard works: the harpsichord and virginal, described in detail in the highly informative booklet notes, written by the artist.

Released to coincide with 400th anniversary of De Macque’s death.