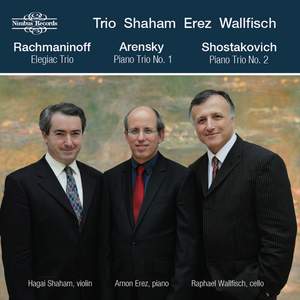 The deeper the music, the finer the vividly-recorded performance from these distinguished players...[they have a firm but never under-emotional grip oon Shostakovich's Second Piano Trio. The... — BBC Music Magazine, Awards Issue 2015, 4 out of 5 stars More…

When the press has them down as “Shaham and Erez… probably the most dazzling I have heard…” (American Record Guide) and “Wallfisch… one of the most outstanding international cellists” (Leipziger Volkszeitung) and these three giants decide it’s time to join forces, one had better sit up and take notice for something quite incredible is bound to become of it! In fact, that is exactly what happened when their piano trio came to life at the beginning of 2009 and was greeted with great enthusiasm from audiences that found themselves bowled over by the intense togetherness and extreme musicality of this exciting new ensemble!

The trio’s first CD (Nimbus), of both Mendelssohn piano trios, was launched in February 2012 to the highest critical acclaim. Their second recording, of French repertoire, was release d in June 2013 and, like its successful predecessor, has been receiving rave reviews internationally.

The deeper the music, the finer the vividly-recorded performance from these distinguished players...[they have a firm but never under-emotional grip oon Shostakovich's Second Piano Trio. The uninhibitedly brilliant approach to the Allegro con brio reminds us that Shostakovich can have fun and indulge his players even when there's an edge to the entertainment.

The masterpiece is Shostakovich's remarkable work of 1944…the difficult opening, with eerie high notes on the cello, is beautifully managed, with the ambiguous Scherzo brilliant but sinister. The pace is properly steady to allow the chaconne full expression; and with the finale, the ostensibly happy strumming of a Jewish klezmer band is made to sound dark and maimed. The dignified close, in this impassioned, thoughtful performance, is controlled and expressive.