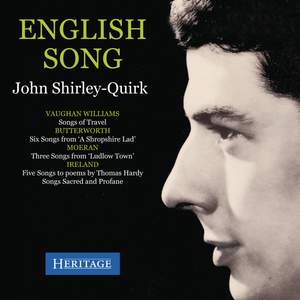 Heritage Records has gathered together a collection of English songs from three Saga LPs, sensitively remastered, which show this wonderful singer on top form...Shirley-Quirk gives us a lovely... — Gramophone Magazine, February 2015 More…

VII. Wither Must I Wander

VIII. Bright is the Ring of Words

IX. I have trod the upward and the downward slope

I. Loveliest of trees

II. When I was one and twenty

III. Look not in my eyes

V. The lads in their hundreds

VI. Is my team ploughing?

I. When smoke stood up from Ludlow

III. Farewell to barn and stack and trees

Purcell: Man is for the woman made (from The Mock Marriage, Z605)

Purcell: Twas within a furlong of Edinburgh Town (from The Mock Marriage, Z605)

Humfrey: A Hymne to God the Father

I. Beckon to me to come

II. In my sage moments

III. It was what you bore with you, woman

IV. The tragedy of that moment

V. Dear, think not that they will forget you

II. Hymn for a Child

Ireland: The merry month of May

Ireland: I Have Twelve Oxen

As a tribute to the late John Shirley-Quirk, Heritage is proud to re-issue the recordings he made of English song for the SAGA label in the 1960s. Three LPs were originally laid down: 'Songs of Travel', 'A Recital of English Song' and 'The Songs of John Ireland' and they appear here as a double CD. The performances are considered by many to be definitive and the present collection, re-mastered from the original tapes, appears by kind permission of the SAGA Continuation Trust.

The recordings have not been available in CD format for 20 years which makes this Heritage release highly anticipated. John Stanton Shirley-Quirk CBE (28 August 1931-7 April 2014) was an English bass-baritone who started his working life as a chemistry lecturer before becoming a member of the English Opera Group from 1964 to 1976. His early singing career began as a member of the Purcell Singers and as a lay clerk at St. Paul’s Cathedral. He went on to give premiere performances of several operatic and vocal works by Benjamin Britten, recording these and other works under the composer's direction. He sang and recorded a wide range of repertoire by other composers and consequently his discography is huge. His vocal style is characterised by a rich and smooth timbre coupled with a level of musicality which enabled him to interpret the music he was singing with great profundity.

Heritage Records has gathered together a collection of English songs from three Saga LPs, sensitively remastered, which show this wonderful singer on top form...Shirley-Quirk gives us a lovely cross-section of native song...and [his] immaculate diction makes texts unnecessary.

Shirley-Quirke is sensitive, both as regards the vocalism per se, his use of voice and the responses to the words, treated intelligently.