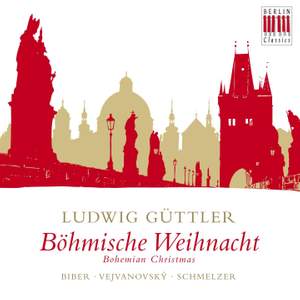 Weichlein: Sonata No. 5 for 2 Trumpets, Strings and Basso Continuo

Sonata No. 5 for 2 Trumpets

“Böhmische Weihnacht”, or “Bohemian Christmas” – means festive Baroque music from the heart of Europe, from where composers spread throughout the continent to all the important centres of music, so that the region was known even then as “the conservatoire of Europe”. The present recording presents spirited music that strikes a new chord, played by Ludwig Güttler and his fellow musicians, who bring out the nuanced shades of this lovely seasonal music.

At no other time of year do people so hunger after music as during Advent and at Christmas. The repertoire is theoretically immense but in reality, relatively few works are familiar. Bach’s Christmas Oratorio is omnipresent, as are the beautiful Christmas carols and the Italian pastoral concertos, but not much else. What can be meant by a “Bohemian Christmas”? Which works and composers spring to mind? The region after all verges on Central Germany, with its rich musical tradition centring on J.S. Bach. Yet Bohemia and neighbouring Moravia also lie in the heart of Europe. With its courts, principalities and churches, the country now known as the Czech Republic was once linked with centres of music like Dresden, Prague and Vienna. Musicians born and trained in those regions often sought to establish themselves professionally elsewhere and so took part in the active cultural exchange within Europe. “Bohemian musical history does not begin with Smetana and Dvorák, as we tend to think today”, says Ludwig Güttler. His selection of works for this release, part of which was recorded during a concert at the Dresden Frauenkirche in December 2012, tells us so with amazingly beautiful music and introduces us to new repertoire in the altogether familiar tonal language of the Baroque.