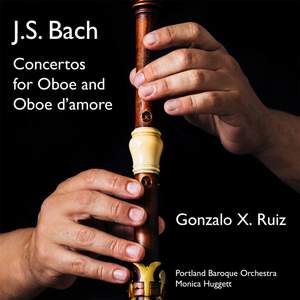 In 2009, Gonzalo X. Ruiz joined Monica Huggett and her Ensemble Sonnerie in a recording of Bach’s Orchestral Suites which included a reconstruction of the Second Suite replacing the familiar flute solo with oboe, a premise soundly supported by the musicians’ research. The album went on to top the Billboard Classical Chart and was nominated for a Grammy Award. Gonzalo returns with an equally convincing recording of concertos commonly heard on keyboard, performing his own adaptations for oboe and oboe d’amore. He joins forces once again with Monica, this time with her Portland Baroque Orchestra. Upon hearing the beauty and virtuosity of Gonzalo’s playing it becomes easy to believe that Bach had the sound of the oboe in mind when composing these popular works.