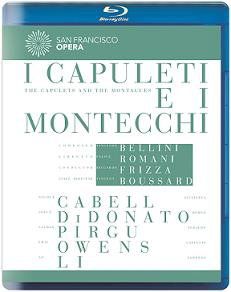 when you listen and forget about the fashion runway, this is a fine performance of Bellini's score. Joyce DiDonato is everything you would want in a Romeo, ardent and angry and in superb voice...And... — BBC Music Magazine, February 2015, 4 out of 5 stars More…

Bellini’s bel canto masterpiece I Capuleti e i Montecchi, inspired by the tragic tale of Romeo and Juliet, is what The New York Times calls “an opera of definite dramatic appeal.”

The cast is headlined by international stars Joyce DiDonato (winner of the Grammy and the ECHO Klassik) and Nicole Cabell as the ill-fated lovers Romeo and Giulietta.

The production features stunning costumes by renowned fashion designer Christian Lacroix, a frequent collaborator with Boussard and a prominent fashion icon known for both his couture house and his theater, ballet and opera costumes.

Bonus: Interviews with the artists

when you listen and forget about the fashion runway, this is a fine performance of Bellini's score. Joyce DiDonato is everything you would want in a Romeo, ardent and angry and in superb voice...And her Juliet, Nicole Cabell, matches her at every turn with a gloriously smoky middle registerthat effortlessly stretches up to the top extension of her voice.

DiDonato, in particular, knows how to act in this repertoire. She also, of course, knows how to sing it, imbuing her lines with elegance and urgency, musicality and, when needed, bravura...If you can overlook the sometimes baffling production, this is recommendable as a well-presented, modern video version of the piece.

In this of all operas it is the singing that really matters and the superb rendition of the score we are given here – with Riccardo Frizza obtaining splendidly nuanced playing from the orchestra – will enchant viewers and listeners alike.