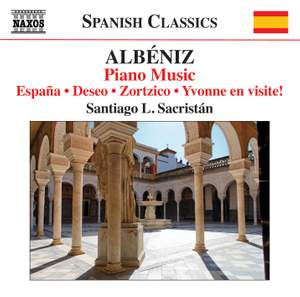 Albéniz: Minuetto No. 3 in A flat major

Volume 6 of this complete edition focusses in the main on Albéniz’s richly varied, early salon style. It includes the dazzling Chopin influenced Vals Champagne, the Estudio de concierto which rivals Liszt for virtuosity, and the famous Tango from España: Seis hojas de Álbum, a set which conjures up Spain in its rhythms, harmonies and sense of drama. Written a year before the composer’s death, Yvonne en visite! includes a humorous scene during a pupil’s reluctant performance, while the Marcha militar is Albéniz’s earliest work, composed at the age of eight.